Gender equality is one of the founding values of the European Union, and a key objective of the Sustainable Development Goals.

It is also smart economics: empowering women is vital to enhance business productivity and to catalyse economic growth, social cohesion and social justice.

As the EU bank, it is our duty to ensure that the projects we finance protect all parts of our communities. Women, men, girls and boys must have the opportunity to benefit from them equally and equitably.

Three figures about gender inequalities within and beyond Europe

for women globally compared to men

added to global GDP by 2025 if we advance women's equality

Rolling out our strategy

With the aim to embed gender equality in everything we do, in 2016, we approved the first EIB Group Strategy on Gender Equality and Women’s Economic Empowerment. The Gender Action Plan, endorsed in January 2018, guides the implementation of our strategy.

The first phase of our action plan lays the foundations needed to establish shared ownership of the Gender Strategy across the EIB Group and trigger a shift in our modus operandi.

Though global in its relevance and long-term application, the plan reflects the strategy’s approach of careful prioritisation to identify incremental milestones over time, with work outside the EU being launched first.

Reflecting the strategy’s three thematic areas of action, as well as catering to institutional foundations that must be firmly introduced, the priorities of the first phase of the EIB’s plan are as follows: 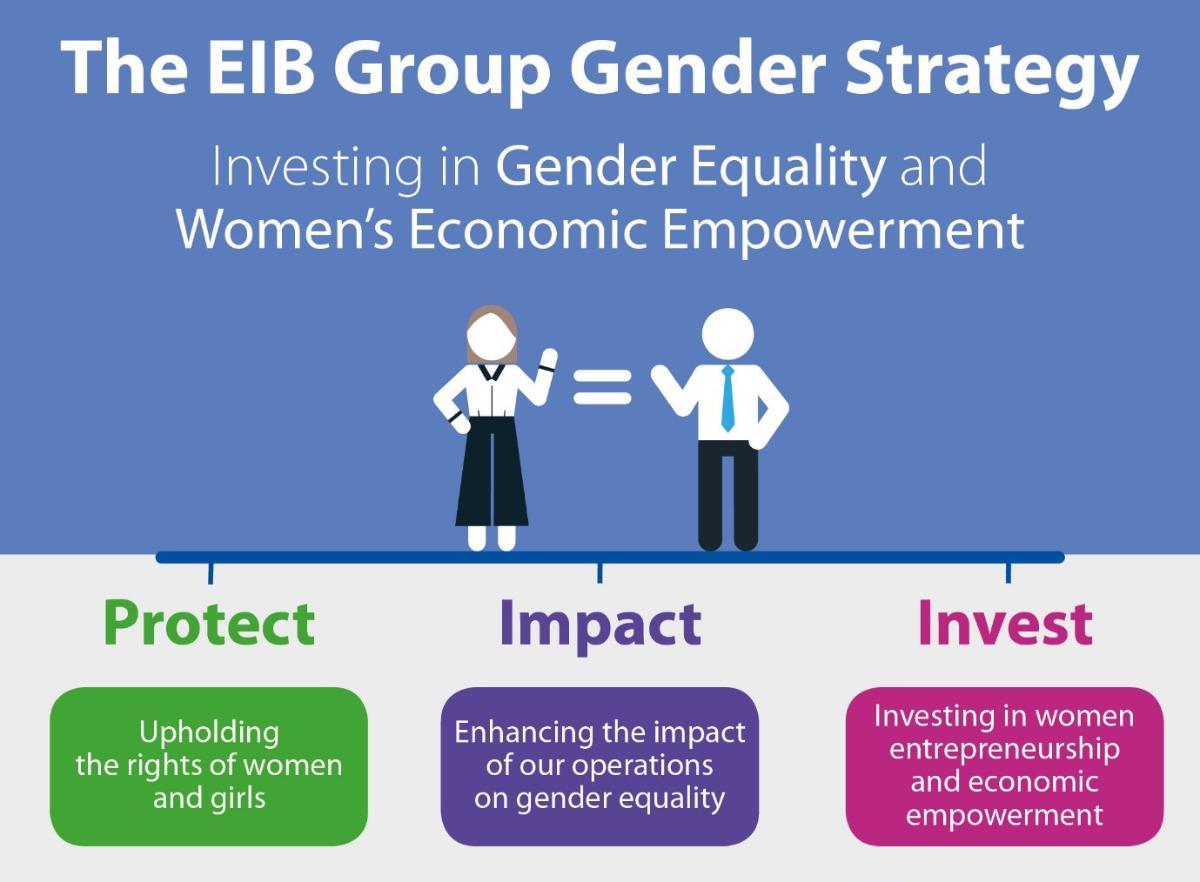 Following its endorsement in January 2018, we embarked on the first phase of this Gender Action Plan. It will be followed by a second phase over the 2020-2021 period.

Engagement with civil society groups and industry partners over the past years have provided us with valuable insights during the elaboration of the strategy and the action plan. We look forward to continuing to work together with our stakeholders.

During the Finance in Common Summit, the EIB Group joined an alliance of 24 other public development banks to commit towards gender equality financing and accountability. Through this declaration, the participating banks recognise their substantive role in the achievement of gender equality inside SDGs, and make a concrete voluntary commitment in the following areas:

Our organisation also values diversity and inclusion when it comes to its employees, as they are good for people and good for business.

Discover the Diversity and Inclusion 2019 Progress Report: An overview of the Bank’s progress towards its diversity and inclusion objectives

Together with the One World Media Group, an NGO dedicated to supporting accurate and creative reporting of development issues that break through stereotypes, change the narrative and connect people across cultures, the EIB is sponsoring a new award designed to celebrate excellence in media coverage of stories about female entrepreneurship. The award campaign will last until June 2021, providing a platform to share stories about empowerment and female entrepreneurship.

Inspiring stories from female entrepreneurs around the world

Stay up to date