Projects
Our regions of activity

How to apply
Trust fund

The EIB in the Eastern neighbourhood countries

Cooperation with other institutions and organisations
Financing facilities

The EIB in sub-Saharan Africa, the Caribbean and the Pacific

Asia and Latin America
United Kingdom and the EIB

Projects to be financed

Calls for tender for EIB projects are listed in the Official Journal of the European Union. This is mandatory for all non-EU projects.

Should you wish to gain further information on a project, the EIB would invite you to contact the project promoter directly.

The EIB Procurement Complaints Committee reviews the Bank's position relative to complaints arising from tendering of EIB-financed contracts for goods, works and consultant services in case a complaint against the Bank's action has been received.

Tendering process for projects by the EIB for its own account:

More information is published under www.eib.org/procurement.

The EIB does not keep an official list of consultants and suppliers.

Guide to Procurement for projects financed by the EIB 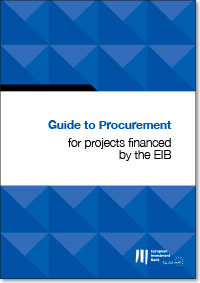 This Guide applies specifically to those components of a project identified for the Bank's financing.